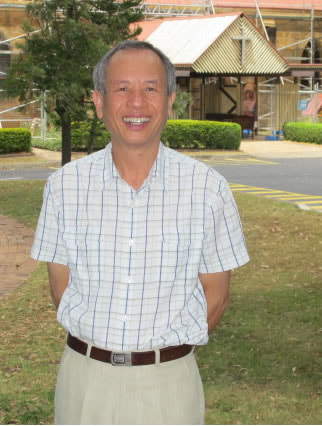 Fr Vudinh Tuong is a former Jesuit priest, and was appointed as Parish Priest to St Francis Xavier, Goodna on the 1st January 2018.  He came to Brisbane in 2001 and his first appointment was an Assistant Priest at Our Lady of Lourdes, Sunnybank for three years and then moved to St Maximilian Kolbe at Marsden and Kingston for a year before he was appointed to be a Parish Priest at St Mark’s Inala on the 1st January 2005.  Following this, he ministered at St John’s Wood/The Gap from April 2011 to the end of 2017.

Vietnamese-born Fr Tuong found his vocation in the aftermath following the Communist invasion of South Vietnam when he became a refugee.

“I saw a lot of people who spent a whole lifetime trying to get up to the ladder in society and when the Communists came they stripped everything away and ran away – they left their family, they left all the glory of the world and they ran away. I saw that there must be some other values more than material wealth.  That was the beginning of my priesthood.”

The year he spent in a Thai refugee camp reinforced the call to turn away from the world.  “I saw all the volunteers, who knew nothing of us, but came to help us and try and be nice people. I learnt from these people and I tried to help them.”
​
Fr Tuong escaped Vietnam in 1979 and landed in Australia.  He joined the Jesuits in 1981 and spent 20 years with them, including 10 years in formation, but due to a debilitating illness, he wound up in sunny Queensland.  Whilst in recovery, he pursued a call to be a diocesan priest within the Archdiocese of Brisbane.  He celebrated his 25-year jubilee in 2016.