History of our Parish

Saint Francis Xavier Church celebrated its centenary in 1992, however its history is longer than that. Initially it was part of Ipswich Parish and with the progress over the years became a separate parish in 1992. The building was built of stone hewn at Goodna at a quarry opposite the cemetery. This same quarry provided the stone for the Brisbane School of Arts and St Patrick's Church in Fortitude Valley. Saint Francis' was originally known as St Patrick's until sometime in the 1910 and the school name was changed in 1948. The school celebrated its centenary in 2010.    (Source: www.home.gil.com.au/~tmacey/VinceHanley/index.htm)

The first couple to be married in the Catholic Church was Thomas Smith and Mary Kelleher, who were married by the late Father Horan PP St Mary’s Ipswich . The Smiths lived in Logan Road, Dingo Hill (Gailes), and raised a family of 5 sons and 7 daughters, some of whom still live in the Goodna, Ipswich and Brisbane districts. (Source: www.goodna.info/history/pricemem.html) 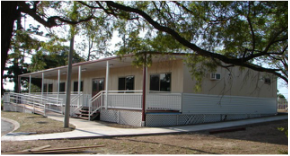 ​In 2006, the Parish Pastoral Council addressed the need for a Meeting facility to cater for the needs of parishioners and the Out of School Hours Care Service. Fundraising was introduced to meet the cost of $200,000.

On Saturday 3rd March the parish Centre at St Francis Xavier’s Goodna was dedicated in the memory of Fr Ron Illidge. The Centre now known as the Ron Illidge Centre was blessed and dedicated by Fr Peter Casey dean of the South Country Deanery.

Fr Ron was parish priest in Goodna between 1975 and 1985, during which time he replaced the old dilapidated timber presbytery with the present low set brick structure, added the pergola to the side of the church and introduced RCIA to the parish as a pilot parish in the Archdiocese. Fr Ron died in December 2004 after a long illness.

Members of Fr Ron’s family including his brother Terry and his wife Dallas, with a number of nieces and nephews were present. Also Fr Derek Furness, a class-mate and long time friend of Fr Ron, traveled from Dalby for the occasion. Councillor Paul Pisasale the Mayor of Ipswich, Deputy Mayor Victor Attwood and Councillor Paul Tully represented  Ipswich City Council.
To commemorate World Youth Day, during which the parish hosted a visit by a group of young people from Austria, the parish Bell was remounted near the Church and blessed by the Dean V Rev Peter Casey.

In response to the housing growth in the parish, in 2011 a portion of the parish including the suburbs of Springfield, Springfield Lakes, Augustine Heights and Brookwater was designated as the parish of Our Lady of the Southern Cross.